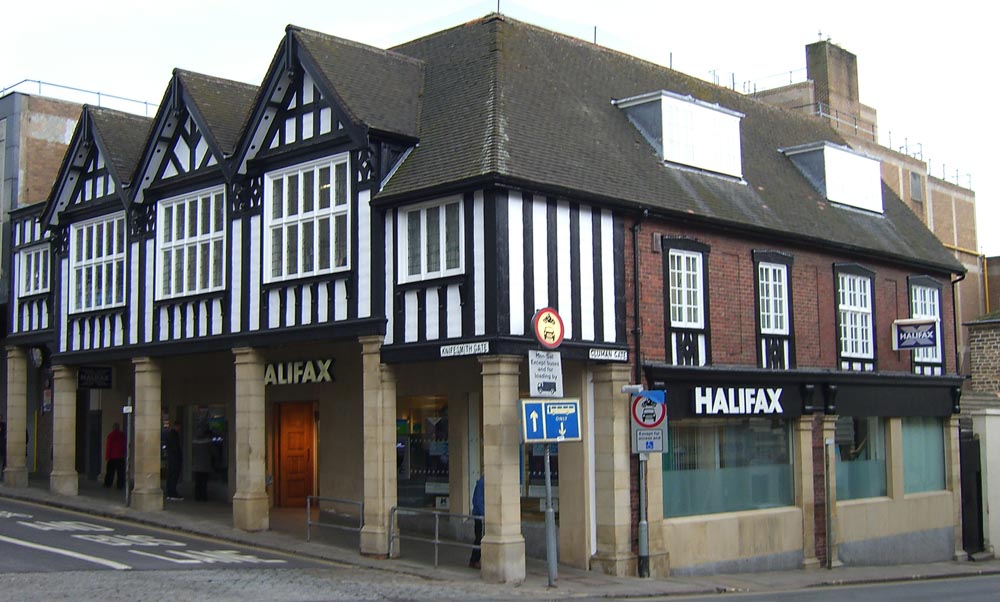 28) Halifax
Originally Irvings seed merchants, many older residents of the town remember it as a place where you could buy yeast and flour to make your own bread. Plans were originally submitted in 1922. 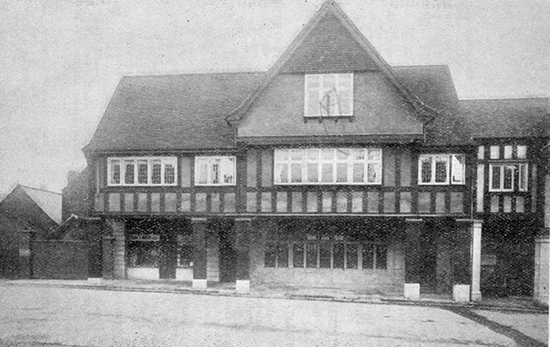 29) The site of the King and Miller

Rebuilt in 1924 for the Chesterfield Brewery. Demolished early 1967 to make way for Littlewoods 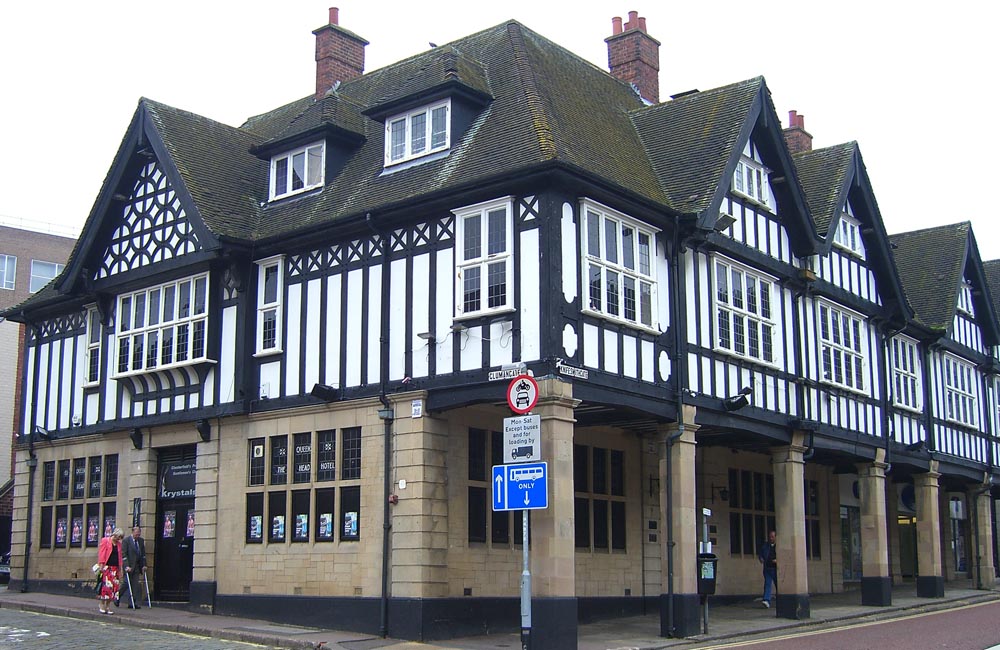 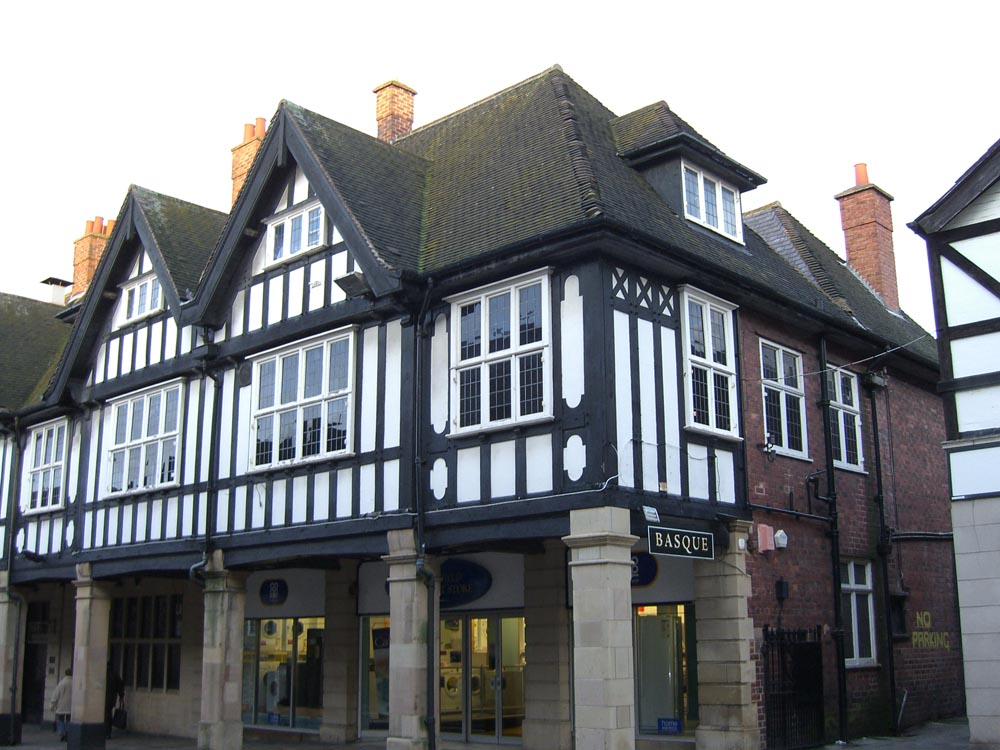 Designed by Wilcockson & Cutts for the Home Brewery. Opened in 1926 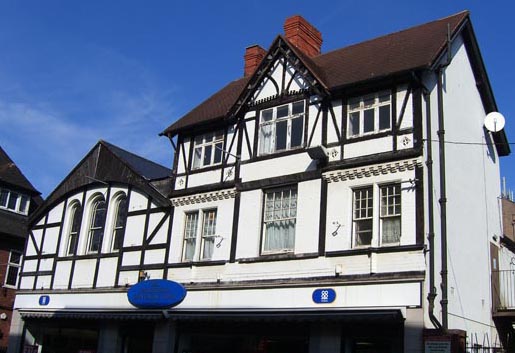 31) These are the only original buildings left on the north side of Knifesmithgate. They were part of St George’s Works, which housed T P Wood’s bottling plant. Originally they had a brick finish; the black and white decoration was possibly added in 1954, when the works were altered to provide a new furnishing and electrical department for the Co-operative. 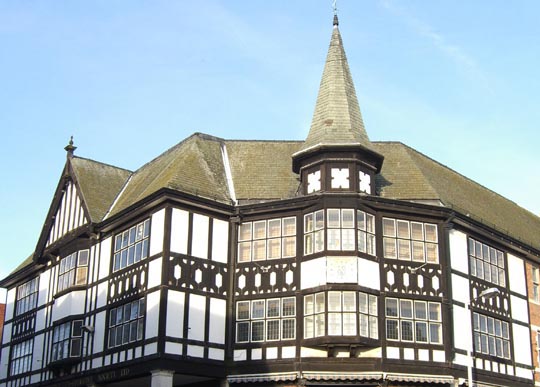 32) The site was occupied by Chesterfield (later the Midland) Co-operative Society) from 1938 until 2013.The most familiar black and white building in the town. 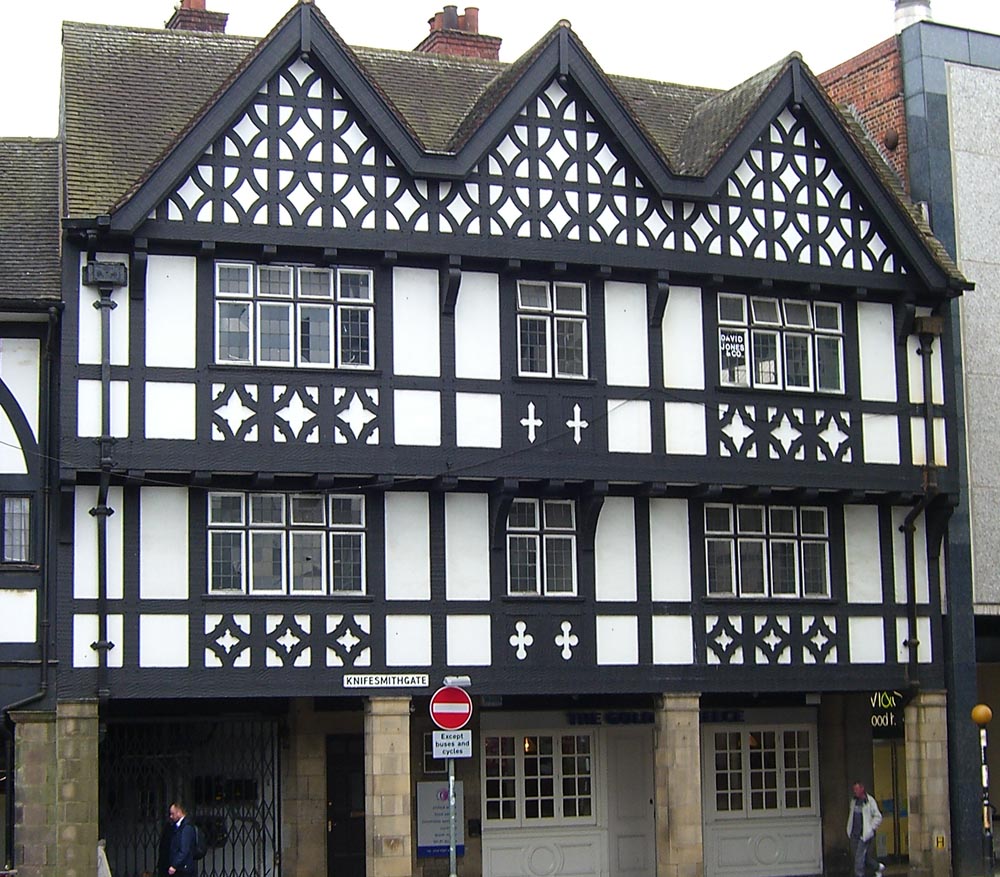 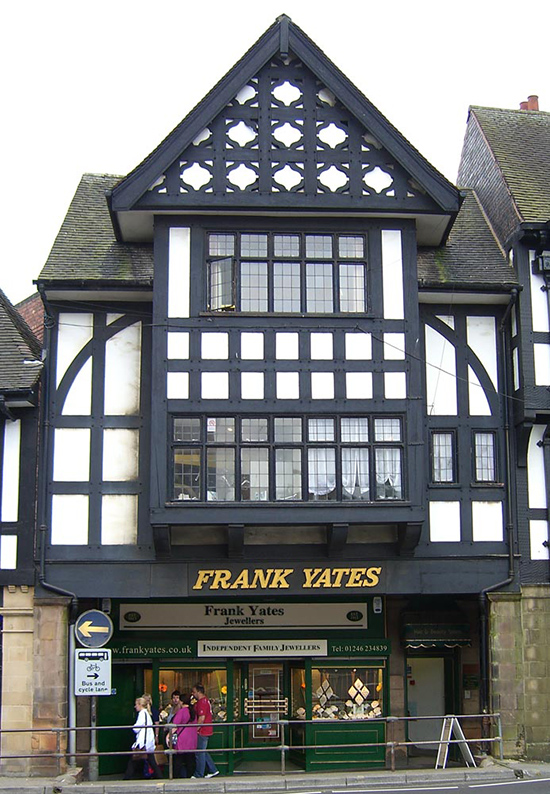 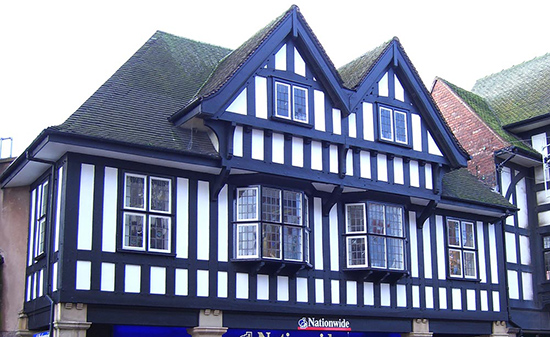 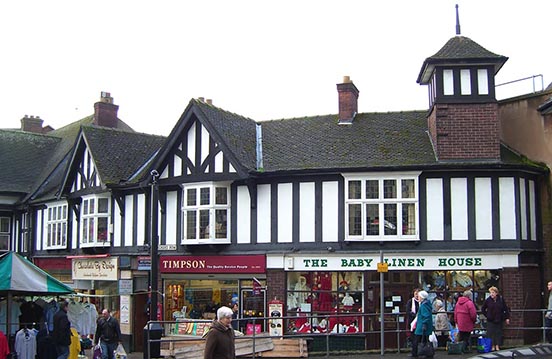 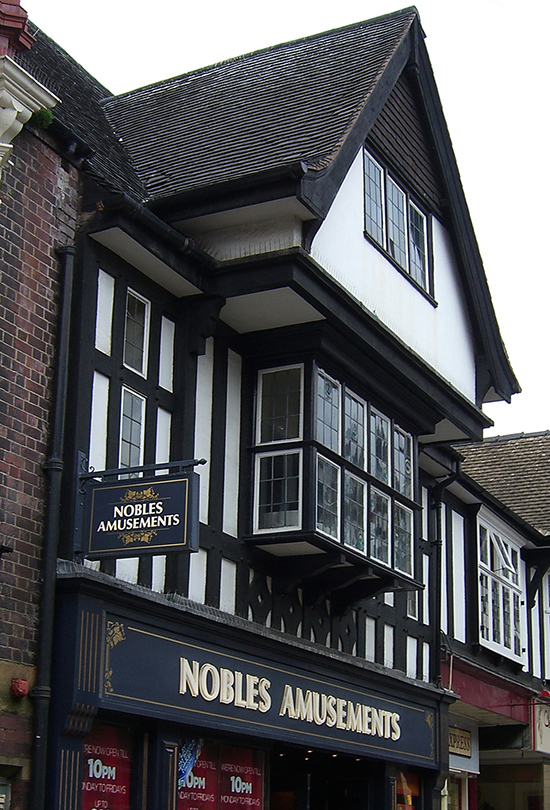 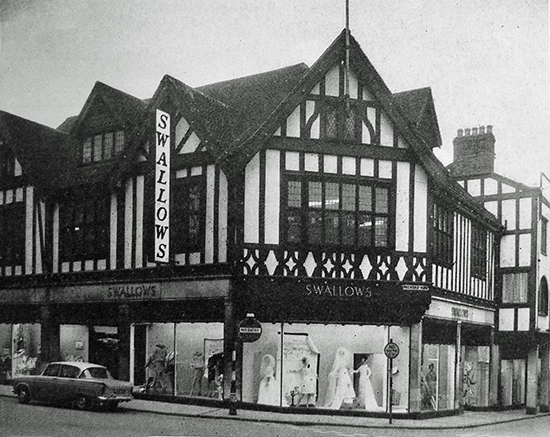 Site of Swallows department store, which occupied the eastern side of Packers Row. It acquired its black and white façade when it was rebuilt in 1930. The store closed in 1970 and the site was redeveloped. 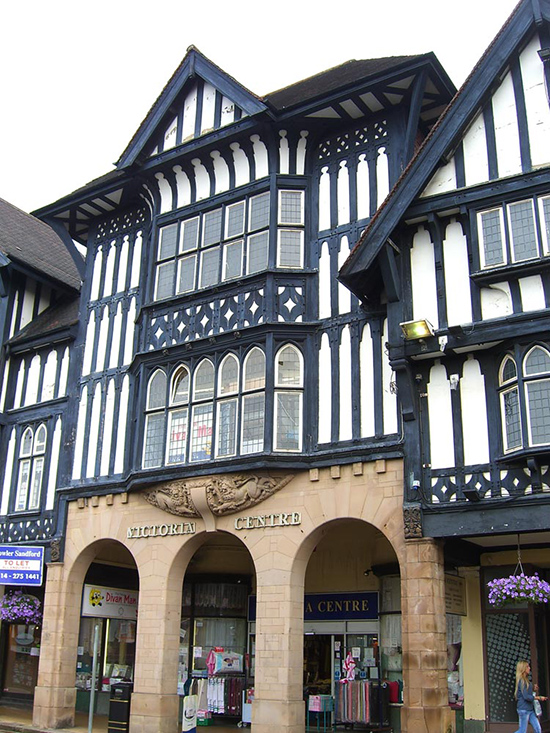 The Victoria complex originally housed a bank, shops and a large billiard hall on the ground floor. Above were a cinema; café and a ballroom. There was a smaller room where billiard demonstrations were given, most probably by Joe Davis, a protégé of the owner Ernest Rudge. Designed by the local architects Jackson and Fryer, it is an Arts and Crafts building of the highest quality and arguably the most important black and white building in the town. Started in 1923 the complex was completed in 1930. There are faces at the top of each column. 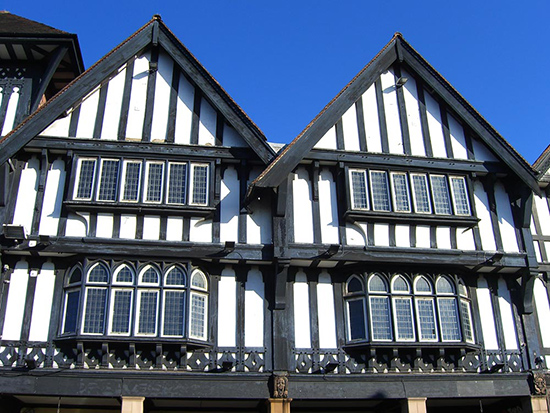 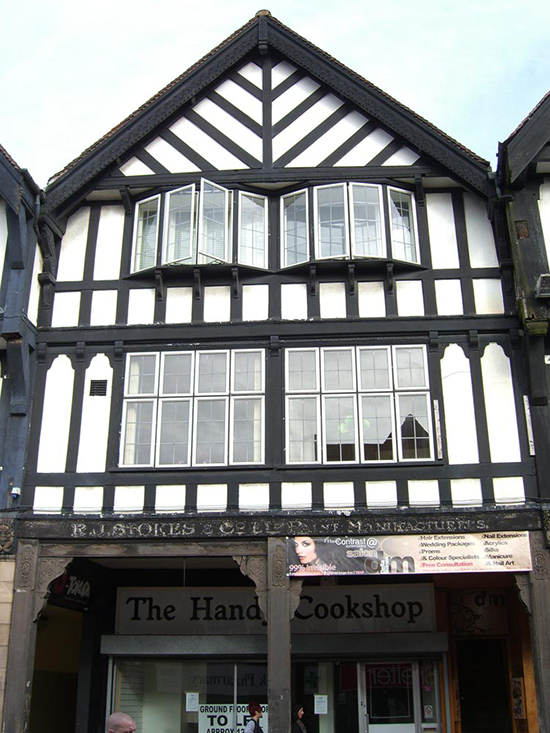 The first of the parade to be built for R J Stokes, paint manufacturer; the only one with a wooden finish to the pillars, it also has a slightly lower roofline. Also by Jackson and Fryer; planning permission received 1923. Unfortunately the windows have been replaced but their design is similar to that of the originals. 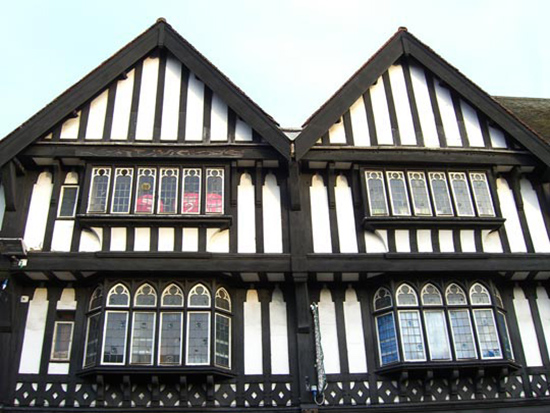 Originally built by Chesterfield Borough Council as the Gas Board Showrooms. This was the second of the parade to be built. It has the most ornate windows in the range. Again by Jackson and Fryer it was opened in 1925. 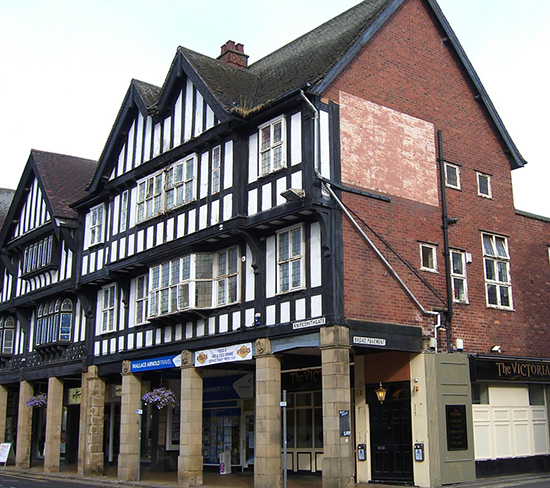 Originally the King’s Head. Designed by Wilcockson and Cutts for Brampton Brewery, it has the trade mark Health and Strength and a king’s head instead of the faces at the top of the pillars. Until it was rebuilt in 1926 the building was further forward. 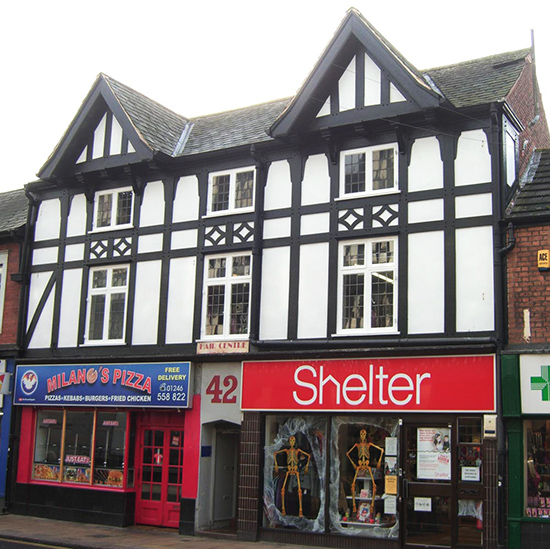